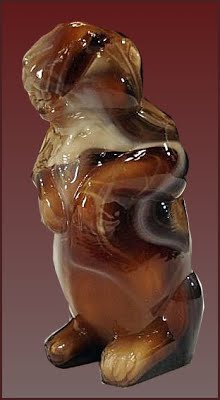 Groundhog Day is February 2nd this year. As this day approaches I keep hearing more about Woodchuck Will, of Olgebay fame, and about Punxsutawney Phil and his shadow from Pennsylvania. My own backyard groundhog keeps telling me that people need to know something about his third cousin twice removed, Imperial's WOODCHUCK.  He says that he doesn't remember anyone ever writing about Imperial's Woodchuck.  Since I'm an old farm girl who raised a baby groundhog with a doll's bottle after Joe brought it home from work, he felt that I was the one that needed to tell the story about Imperial's Woodchuck.

His first sighting seems to be in sales literature dated July, 1964.  An original Imperial mold, he is designated No. 19.  He was named "Marmota Sentinel" which means Guarding Woodchuck.  Available in Crystal only, he is marked "IG" between his feet.  Some refer to him as a rat, a beaver and a marmot, but he is a woodchuck or groundhog.

Imperial discontinued the Crystal production and started producing him in Caramel Slag in 1969, and the Catalog shows they also changed his name to "Woodchuck" and kept the No. 19 and the IG mark.  He was only made in glossy finish.  This is not to say that some did not get a satin finish, but none were retailed to the public in satin.

When Lenox took over the company, they went to a computerized numbering system. Even though he was still No. 19, his new catalog number became 43949 and he was produced in Slag until December of 1976.

In 1982, as a limited edition of less than 300, Mirror Images commissioned Imperial to make the Woodchuck in Ultra Blue, with a small number of them treated with the satin finish.  These are marked with the "ALIG" hallmark between his feel.  He has also been found in a dark Amber or Nut Brown color.  I have not been able to find documentation to determine this exact color or the production dates for it.

After Imperial closed, Boyd's Crystal Art Glass of Cambridge, OH bought the mold and has produced him in several of their own colors:  1985 Bermuda Slag, Mulberry Mist, Touch of Pink, Cobalt & Carmel, 1990 Copper Brown, 1991 Vaseline, Buckeye & Classic Black; 2001 Ivory Blush & Cherry Red, & 2003 BlueFlame.  All are marked with Boyd's "B" in a diamond.

These little critters are easy to find, and they do not take up much space. What a fun way to start a child collecting glass.